"The story that brings together Loïc Bigot, founder of the ToolsGalerie (2003) and the designer Guillaume Delvigne is a companionship made of loyalty and mutual respect. The genesis of their meeting took place in 2008, in Milan.
Milan, the Mecca of design, where the designer studied for six months at the Politecnico school, during his studies at the Nantes Atlantique design school. He returned there at the end of his studies and for three years worked in the studio of designer George Sowden, one of the founding members of the Memphis group in 1981. This collaboration, which mixed industry and research, changed his perception of the profession. At Sowden's side, he freed himself from academicism and discovered a new way of expressing design through free and committed drawing. Back in Paris, he completed his studies in the studio of Radi designers, then Delo Lindo and Marc Newson. Educated by these encounters, revealed to himself, he designed his first models in 2004 while working for others, he truly established himself as an independent in 2011.
To begin their collaboration, Loïc Bigot presents the lamp Campane (2009), in blown glass and resin in a group exhibition.
The solo exhibitions "Relief(s)" (2011) and "Stools4Tools" (2015) came in their own time and confirmed the accuracy and sensitivity of designer Guillaume Delvigne. Through a design that is both meticulous and sculptural, the projected object marks out the domestic landscape. The material expresses in a creative alchemy, the link between space and earth and concentrates an energy that makes sense, a palpable tension.
Guillaume Delvigne's new exhibition is a continuation of his 2015 exhibition devoted to the Stools. He moves the cursor of the design, in height and width, to lead the function of side tables, with more generous forms but with extreme precision. The collection is divided into five parts, five fragments of a thought that engages attention to technique and form, five parts of a whole. The furniture gives rise to two different readings: a three-dimensional sculptural vision in which fullness and emptiness are concentrated, and the design object, a mute servant responding to the specifications of the function.
The archetypal forms presented seem to be monoliths cut directly from the truth of the material, implicit references to primitive, archaic and popular art. The Cairn table in black resined travertine or Paonazzo marble is inspired by the heaps of stones that line the relief. The Utah table in pure white or pure black marble emphasises an architecture on a double elliptical base, dominated by a double top with a clear void. The Caldera table, whose circular top is supported by three bronze legs with a brown/green patina and dark shading at the top and light shading at the bottom, seems to emerge from the ground. The table Pembroke in solid brushed oak, stained black and brown, evokes the dolmen, a megalithic monument, but also the free forms of Charlotte Perriand. The table Mangrove is the only model to combine two materials, glass and chiselled bronze, which are naturally joined. "I like the fluidity of simple shapes, the ellipse, the circle... clear and precise geometric forms, on which the light turns".
The surfaces of polished bronze, wood or stone catch the light. These drawn and manufactured objects carry an irreplaceable emotional power, their skin exacerbating sensuality. The freehand drawing frames the detail, the plan specifies the reason and the speech engages the intention. "My job is to draw, to plan".
These forms of profound simplicity and beautiful universality define a quest for a poetic modernity. Totemic design plunges into the sources of a generous and essential nature.
Anne Bony 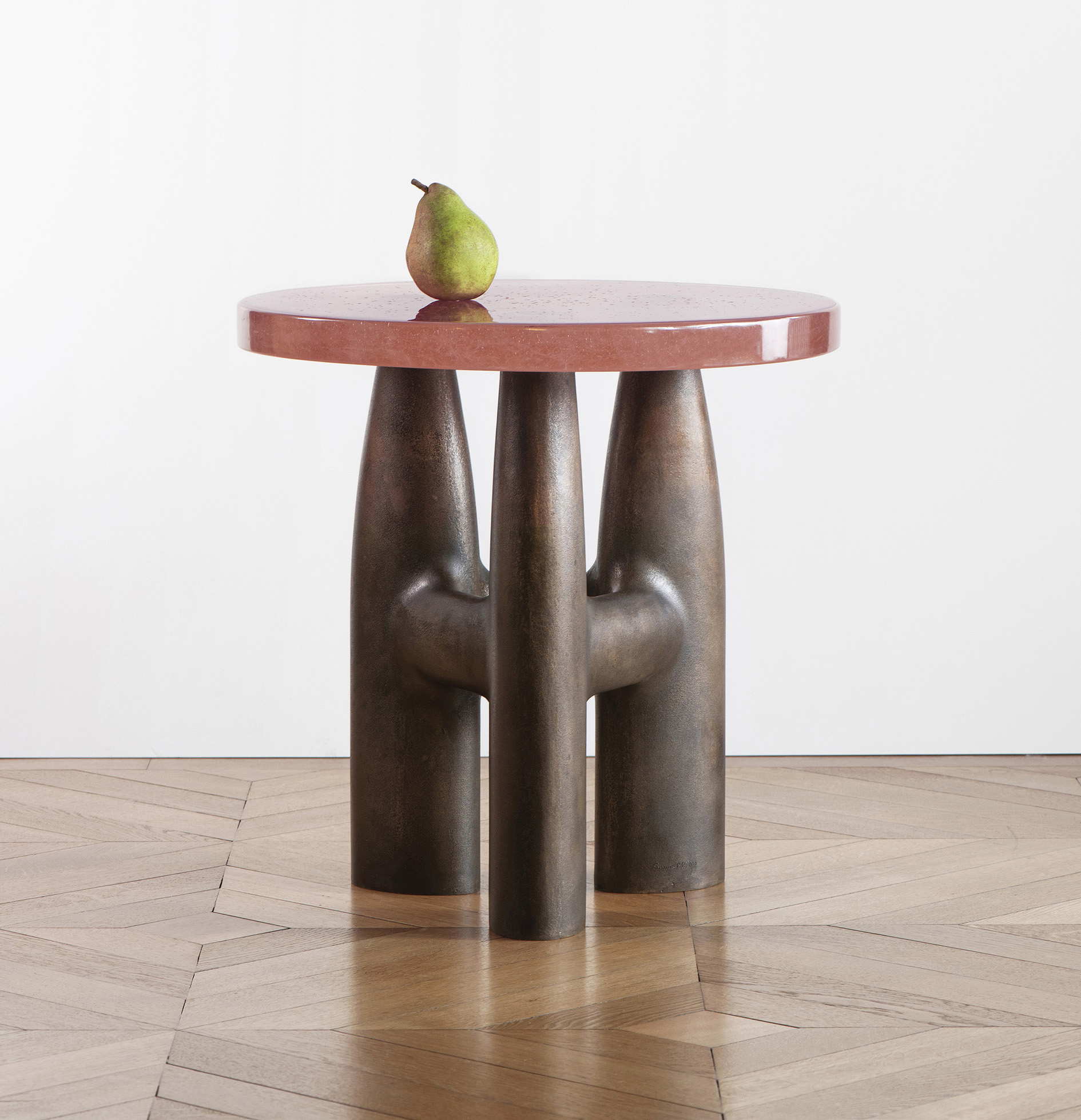 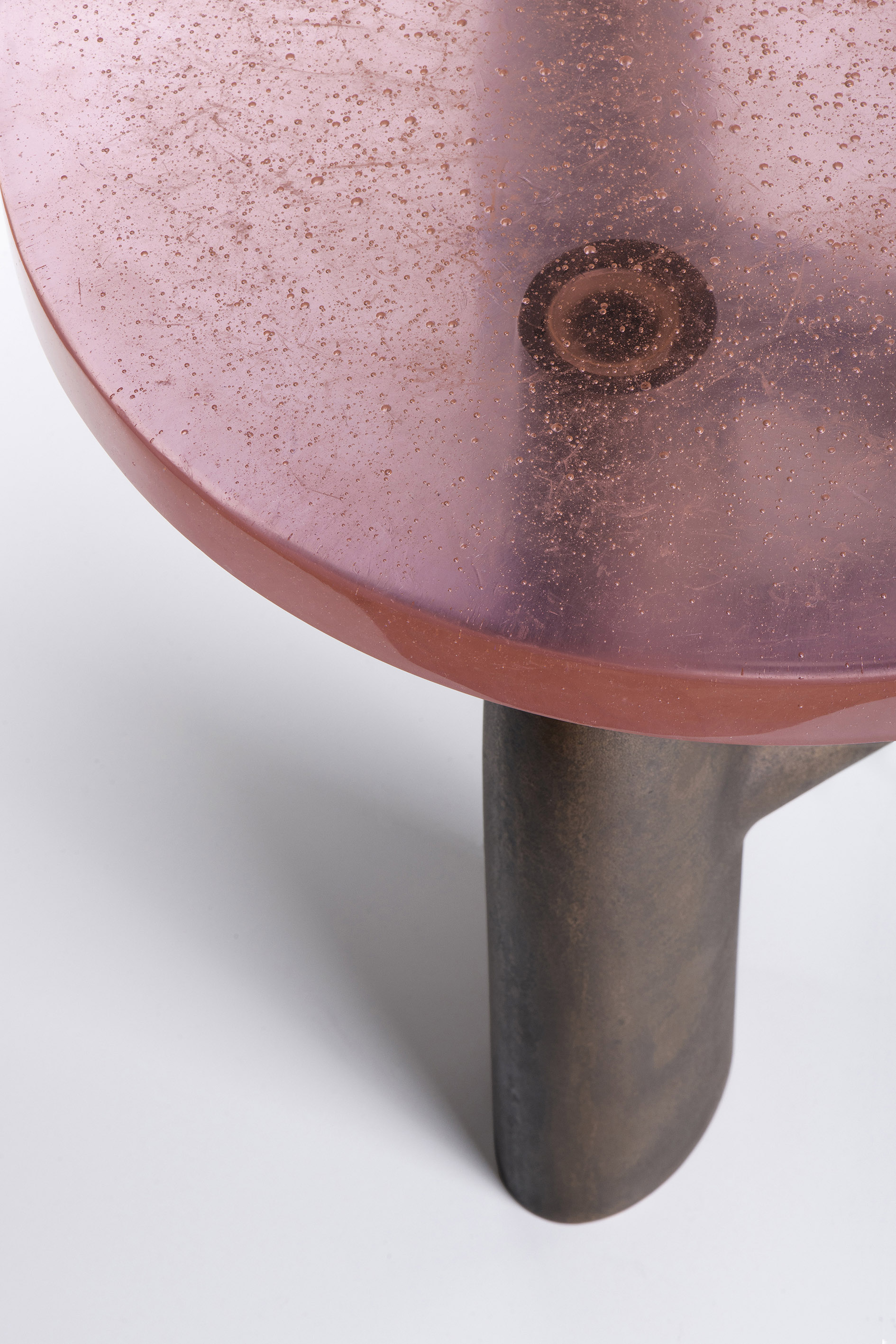 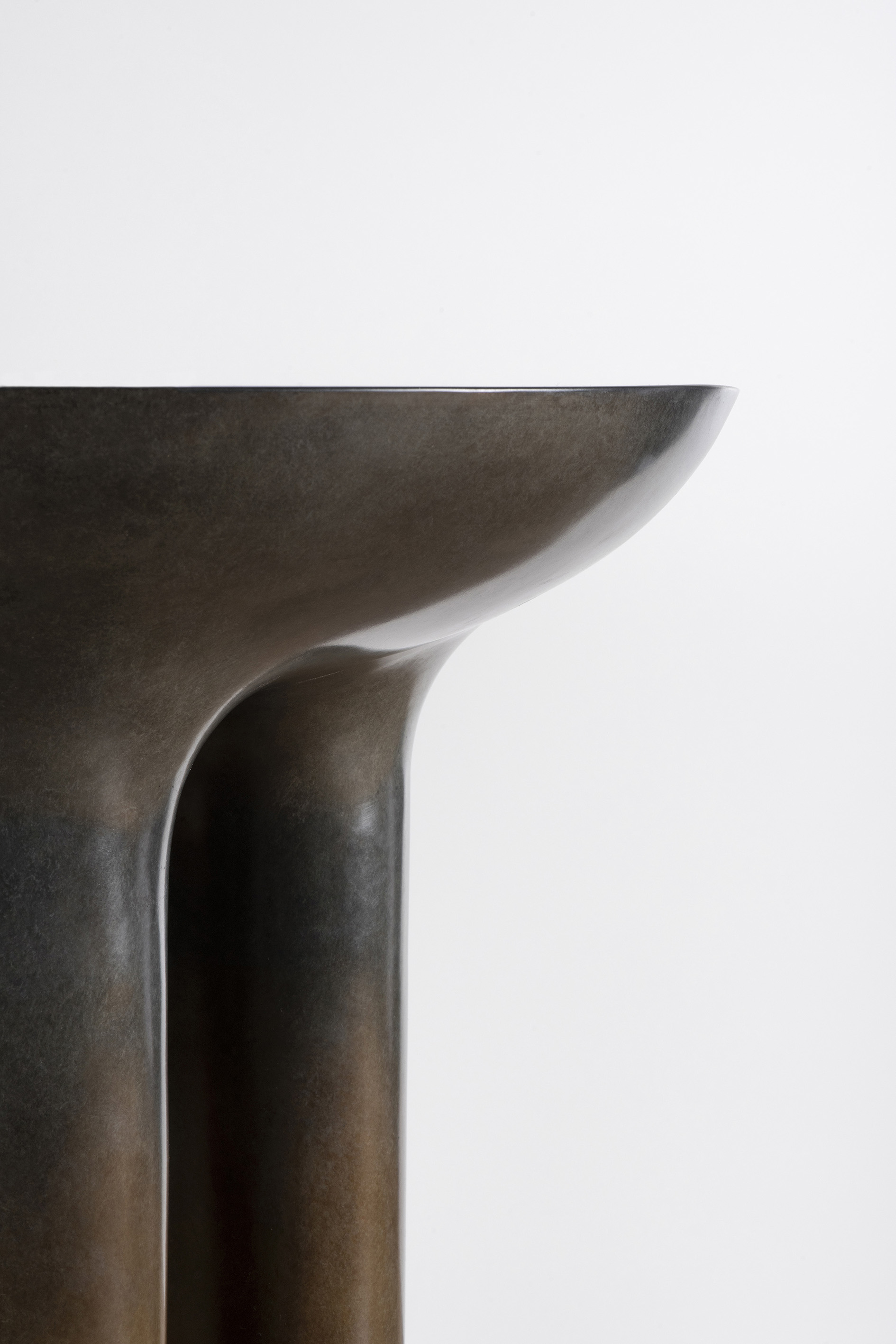 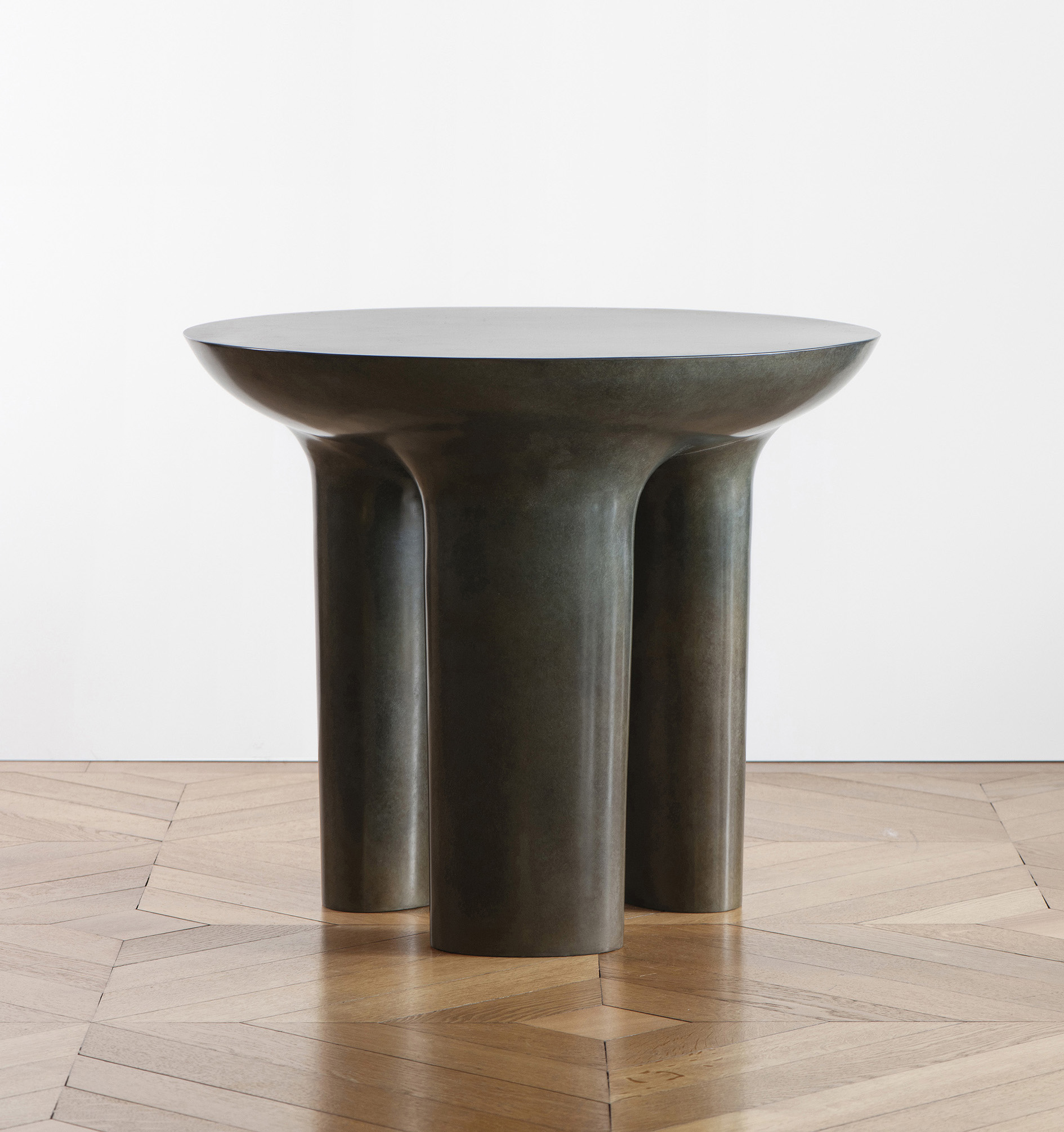 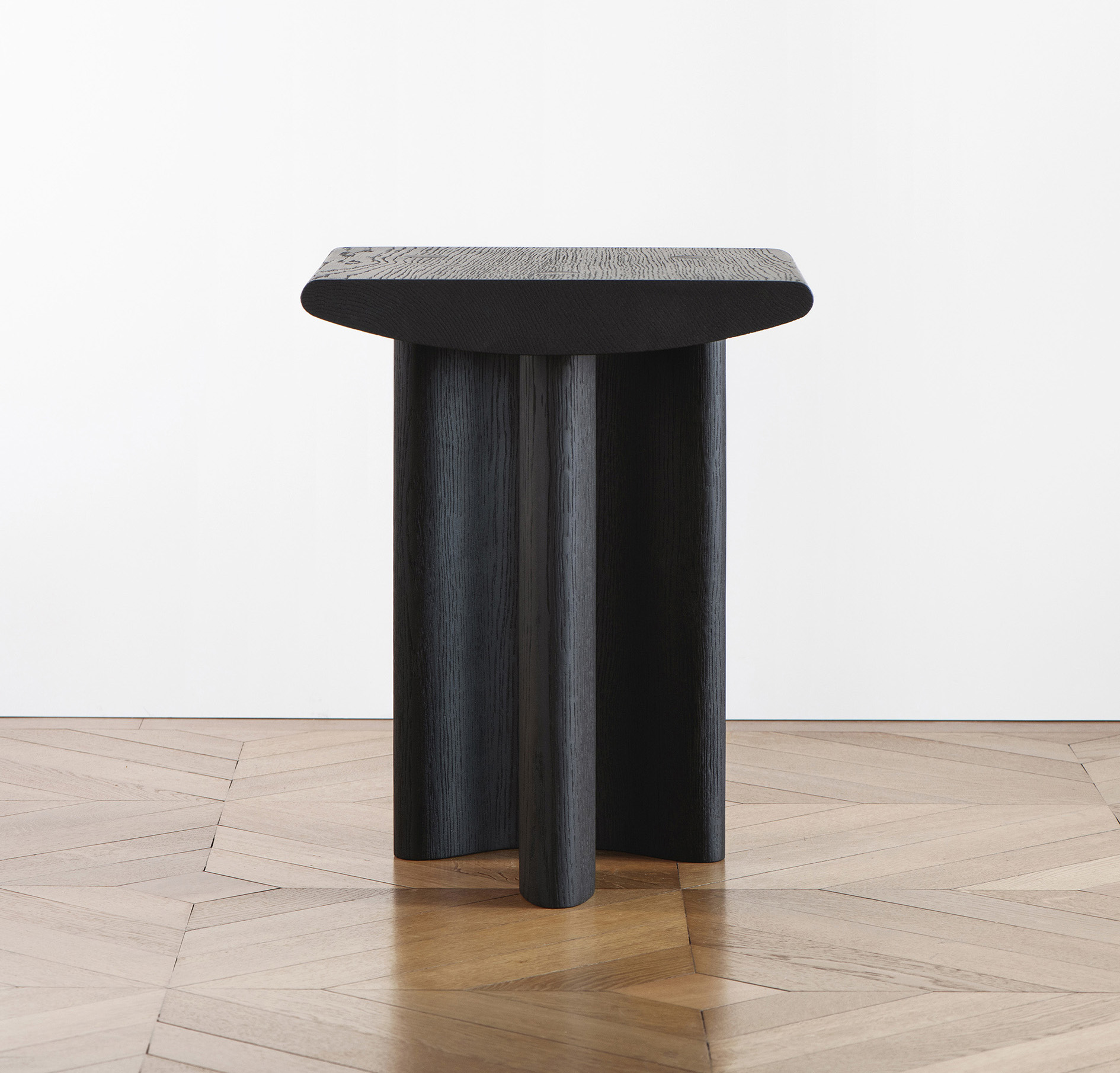 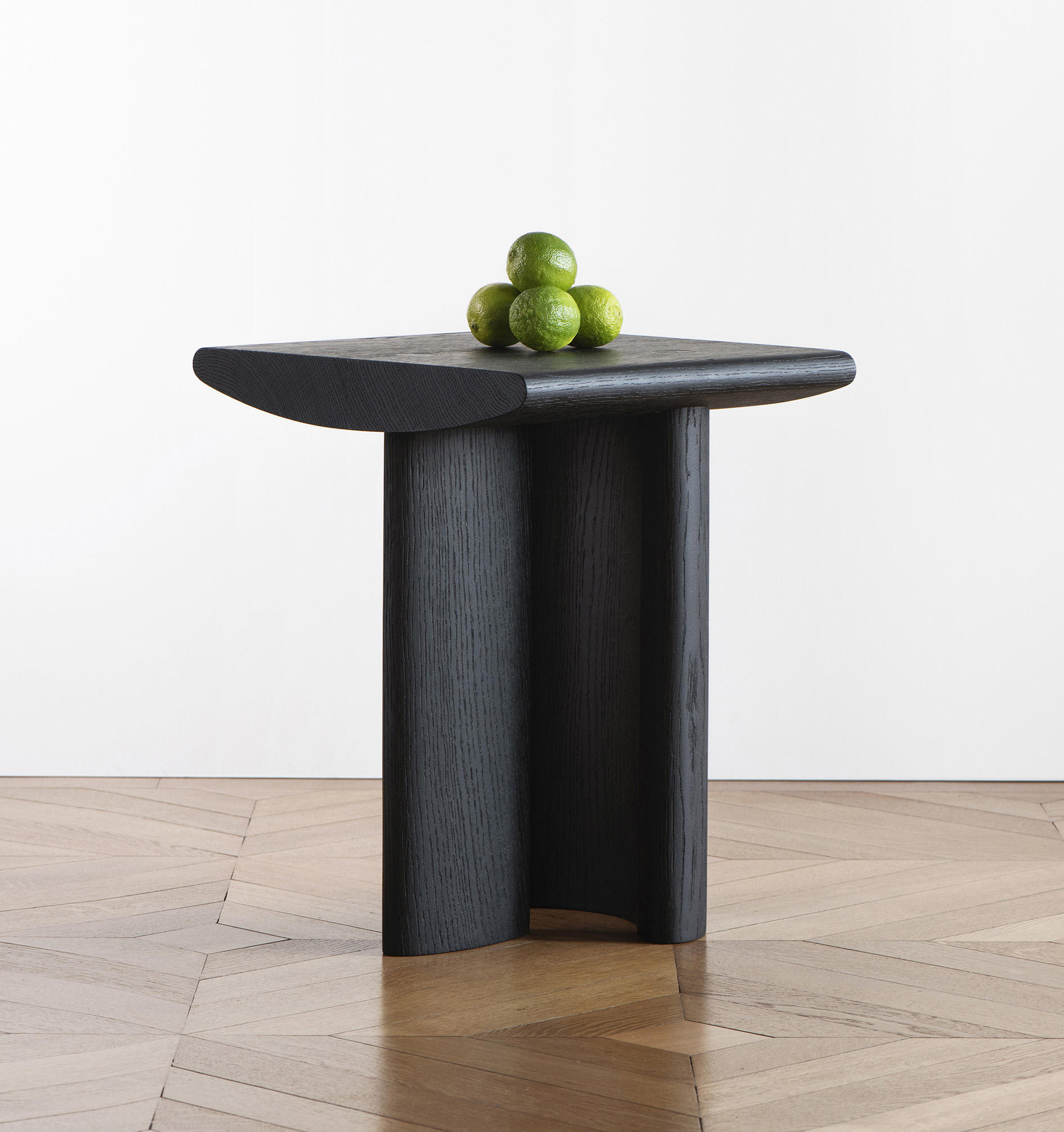 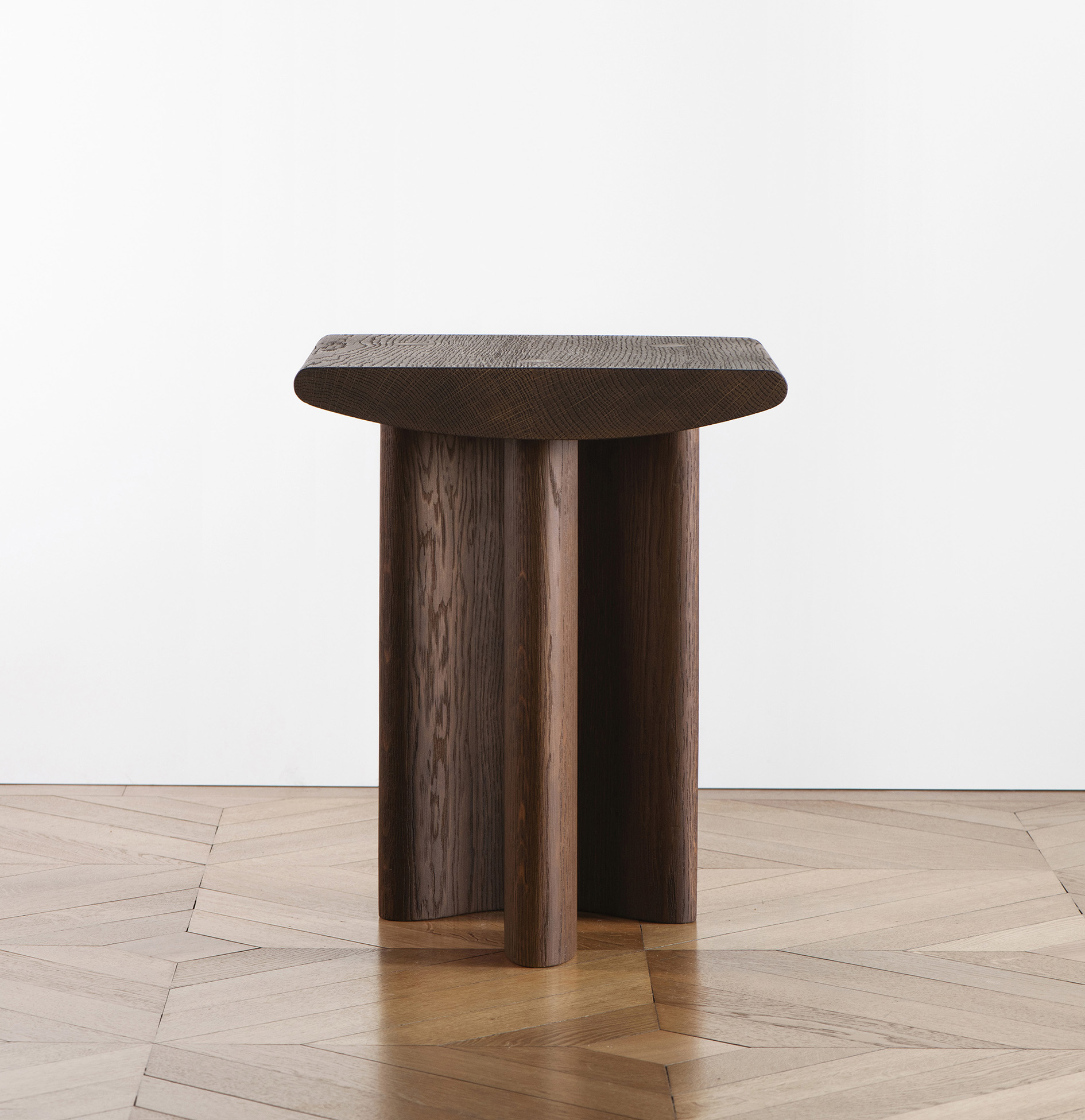 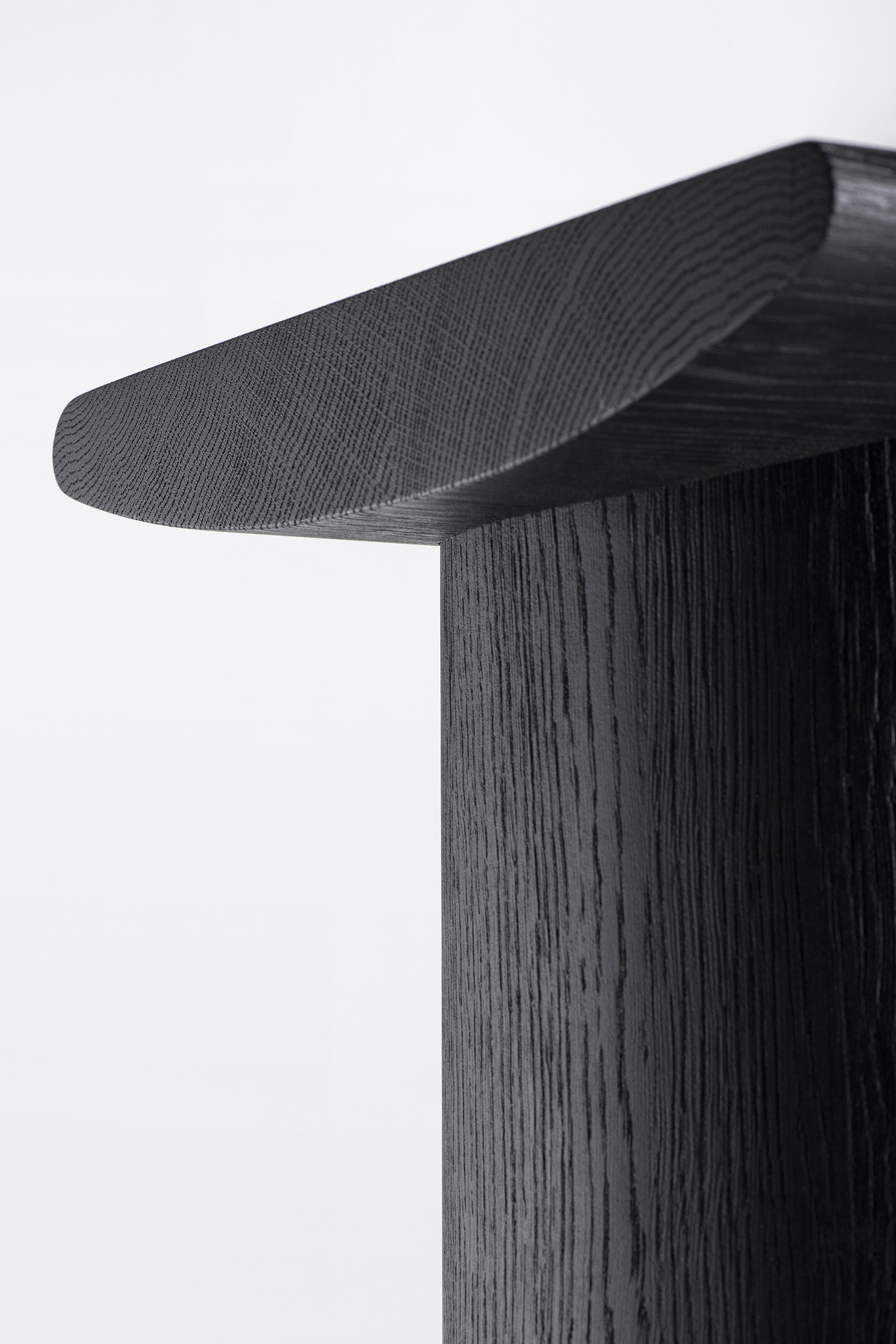 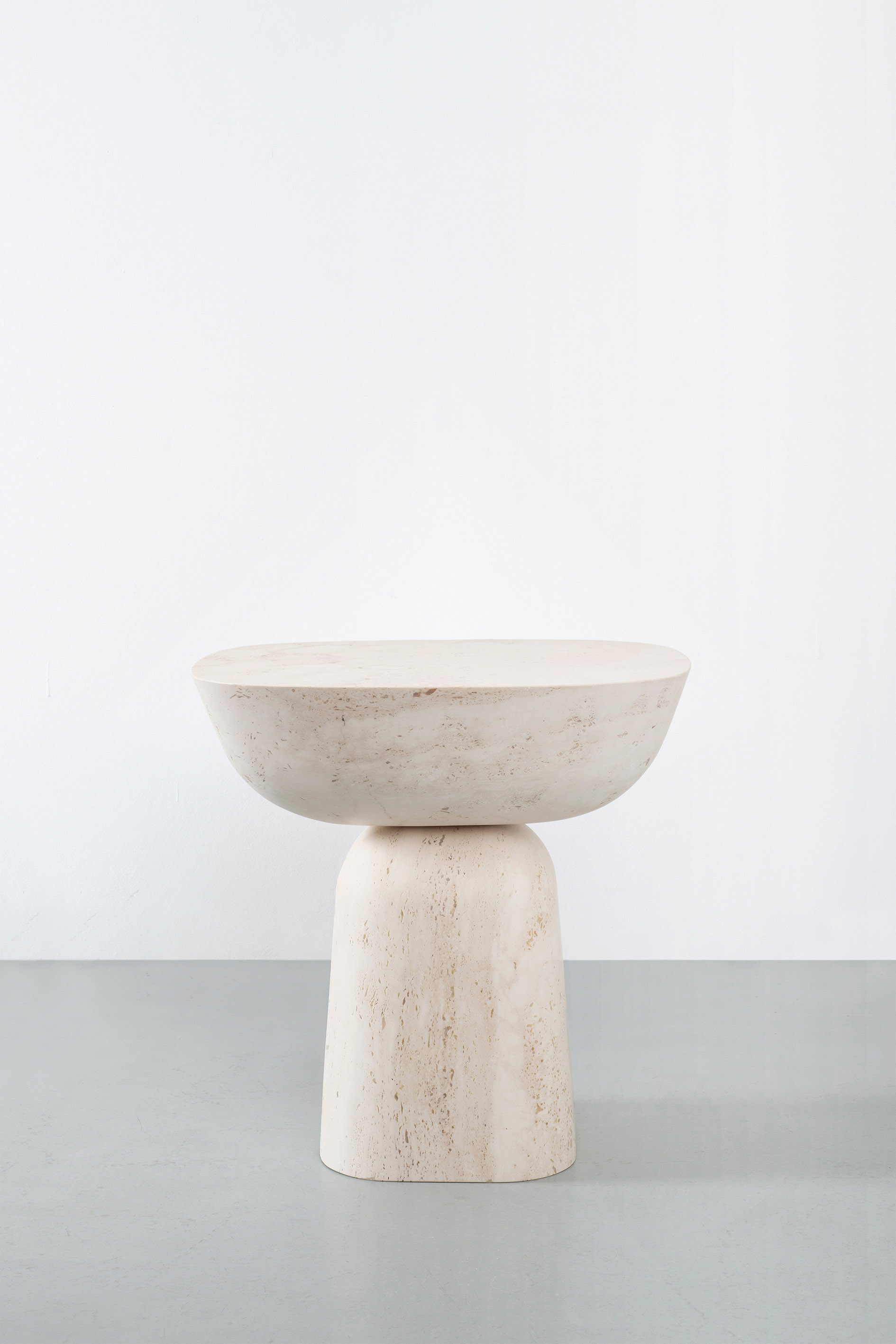 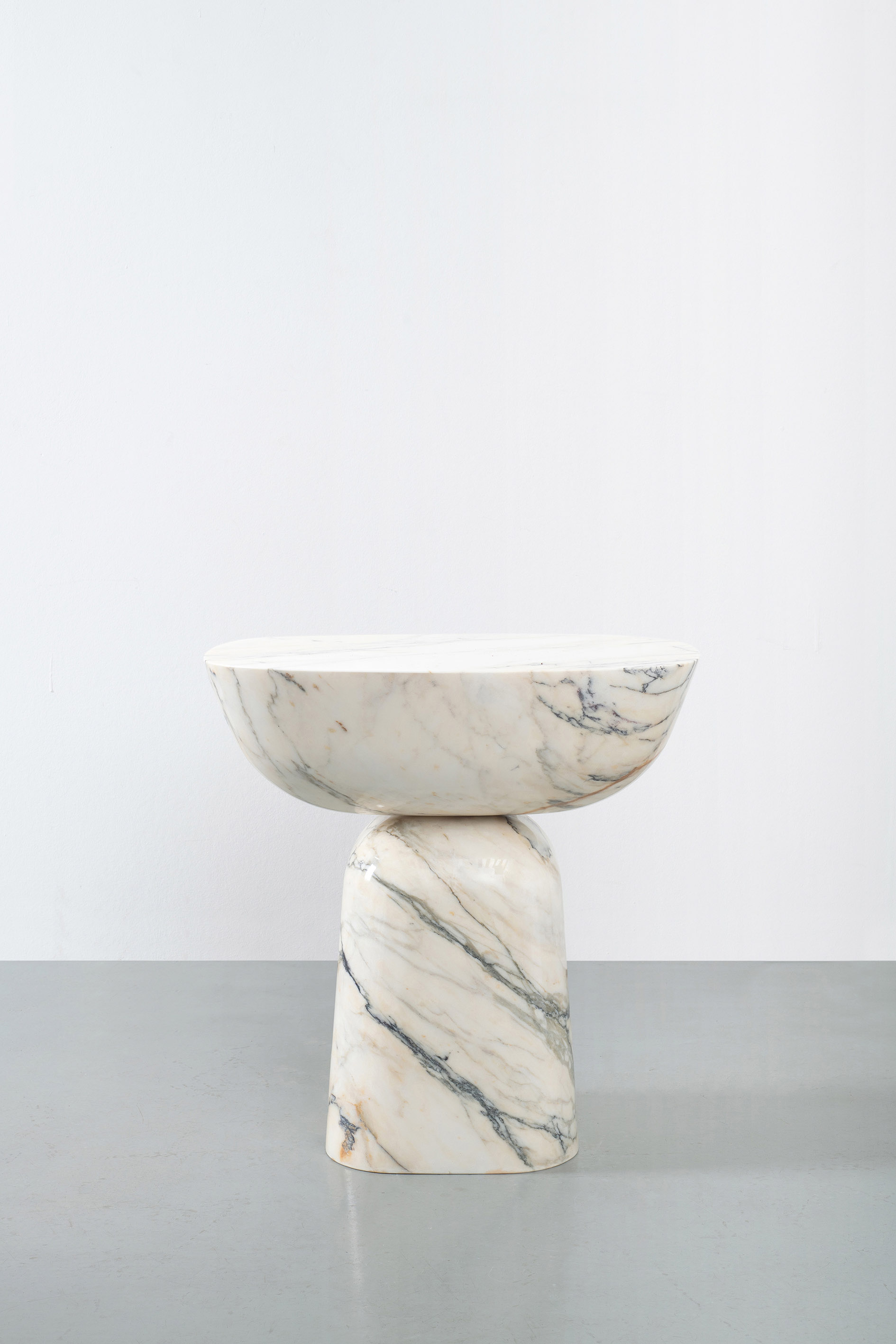 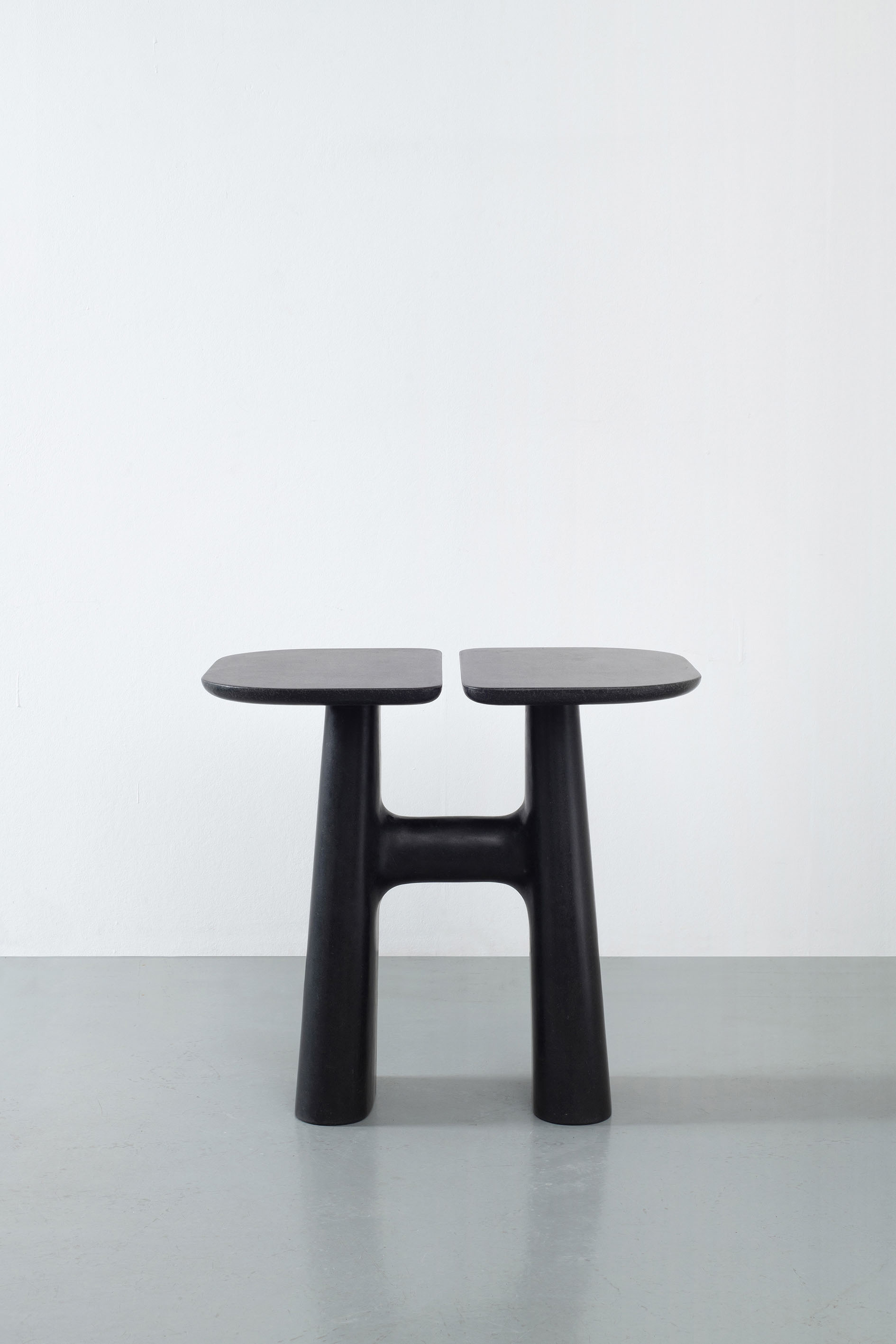 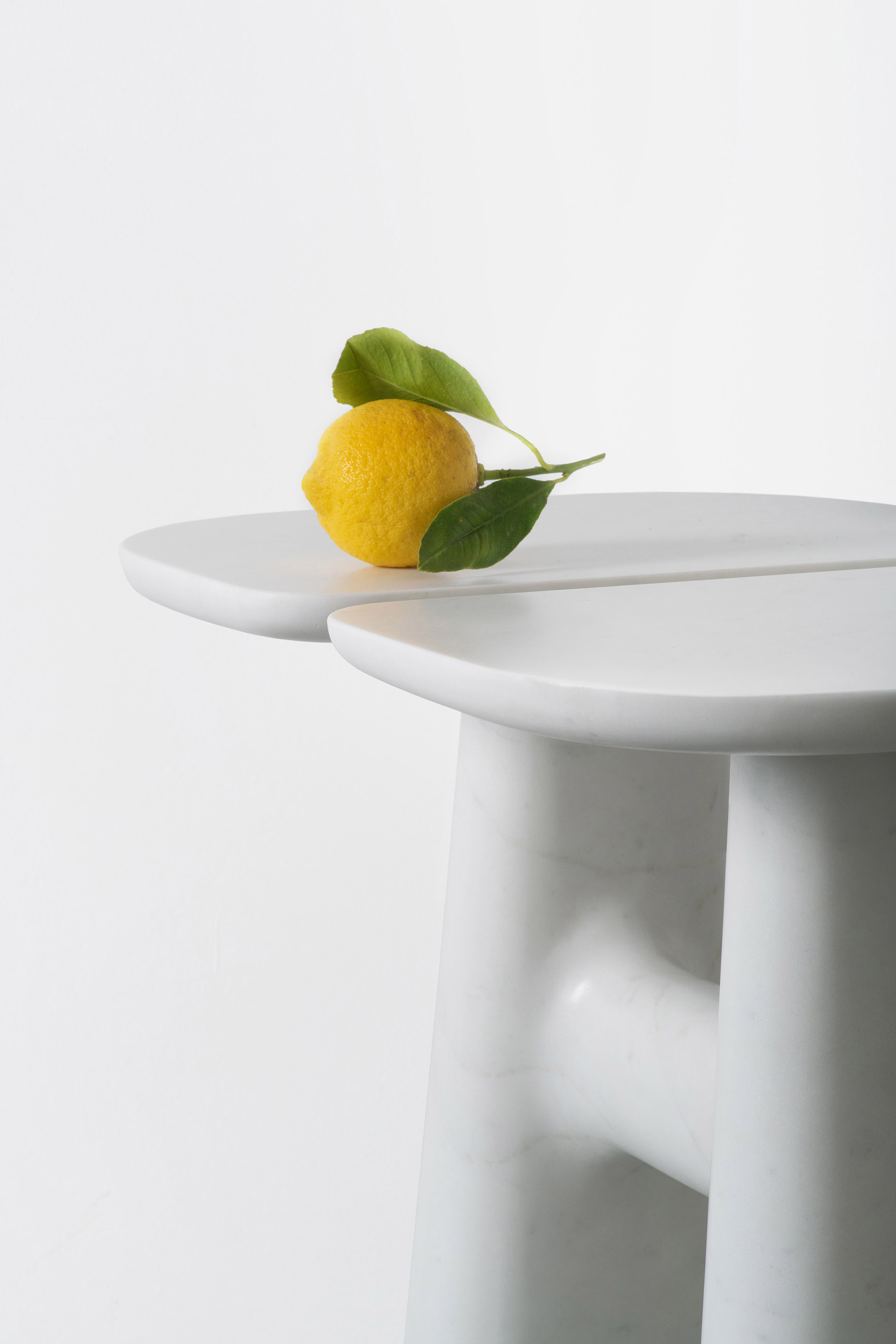