Why are artists, designers, gallery owners, interior designers, jewellers and design schools all lining up in front of Matteo Gonet’s Basel workshop?
The man has a passion: he lives for glass. His technical excellence generates instant enthusiasm. Working with him is a true partnership: empathy, listening, innovation, a keen taste for experimentation and pushing the limits of glass pervade every project he is entrusted with, or now creates himself.
An exemplary career
Born in 1978, Matteo Gonet has been working with glass since the age of 14. After an apprenticeship as a blowtorch welder in Germany, he spent five years touring Europe as a journeyman, travelling from workshop to workshop. In 1980, he obtained a Bachelor’s degree in Fine Arts from the Gerrit Rietveld Academy in Amsterdam and joined CIRVA (the International Glass and Visual Arts Research Centre) in Marseille. He worked as a glassblower for the likes of Philippe Parreno, Ettore Sottsass, Andrea Branzi, the Bouroullec brothers, and met Jean-Michel Othoniel…The meeting was fruitful, as Matteo has since manufactured all of the artist’s glass pieces and continues to do so.
A passion for glass; a sensitive, demanding worker, now recognized.
Based in Basel since 2008, Matteo picks up his blowpipe every day, “preferably in the morning, around seven, when it’s still cool. It’s like playing a musical instrument; it takes daily practice to keep up the feeling, the flowing gestures”.
Matteo makes glass vibrant. Skills practised in his workshop are many, which is not so common: glass is blown, cast, thermoformed, cut, faceted, frosted… no technique seems too much for him, and he knows how to self-efface to better serve the projects. The workshop is a place of experimentation and production which employs a dozen people from all over Europe.
Most of his pieces are monumental: Mathieu Lehanneur’s chandeliers, Jean-Michel Othoniel’s pearl fountain sculptures for Versailles, a vast glass canopy for architect Pierre Yovanovitch.
His pieces are exported worldwide.
Although Matteo likes to describe himself as ‘one who interprets the desires of the artist, relieving him from the burden of technicalities’, he now wants to focus more on his personal work. The man remains humble, doesn’t really like to talk about his work, and prefers to let people look at it freely. “I like the idea that objects have a life of their own. In glass, there’s this tradition of conveying emotion without the artistic discourse”.

For Matteo Gonet’s first monographic exhibition outside Switzerland, we will be displaying seven projects, both old and new:
The imposing and spectacular BALLONS chandelier. Delicate little balloons, reversed, bend the rules of gravity: diaphanous, pastel, iridescent colours, a poetic cloud, ready to fly away, but held back by a multitude of small strings.
A constellation of delicately coloured vitreous paste DRAGEES - transparent, translucent or opaque, they play with the magic of colours (suspension).
IRISATIONS, six large vases: cylinders of glass treated while hot, using fumigation and sodium chloride. This technique, common in the 1900s, reveals the glass’ vibration and movement, while also reminding us that its chemical composition is similar to that of water…
BILLES. Oversized table-top glass balls, 20cm in diameter. Memories of our childhood games and collections, they are made of solid glass including a three-colour replica of the cat’ eye pattern, and hand polished. They were a real technical challenge for Glassworks. These objects of contemplation are a collaborative work between Matteo Gonet and designers Jodoc Elmiger and Valérie Jacquemet. The marbles are featured in the MUDAC Lausanne collections.
MIGRATIONS: small stylized characters, glass shoots, which peacefully invade and colonise the surrounding space. These pieces can be displayed standing or wall mounted.
SILVER DROPS mirrors: these enormous mercury-coated drops, displayed standing or suspended, reflect and distort our environment.
TRILOGIE or northern lights: these pieces induce endless contemplation. 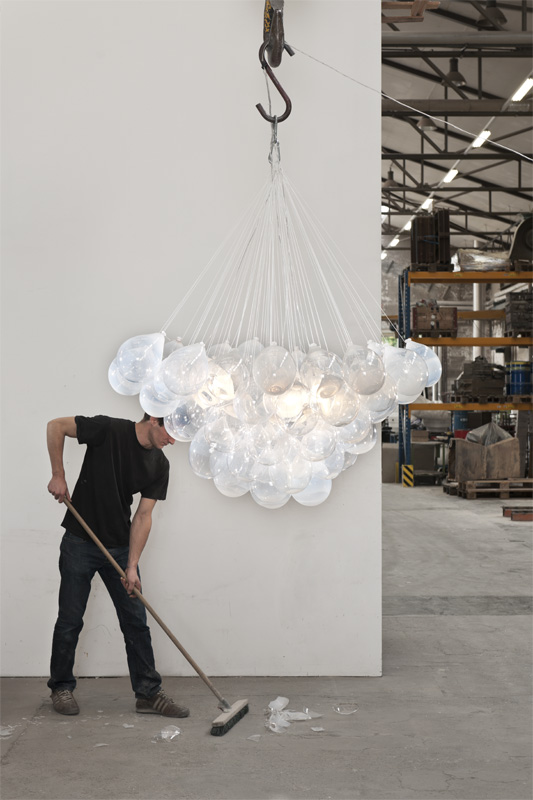 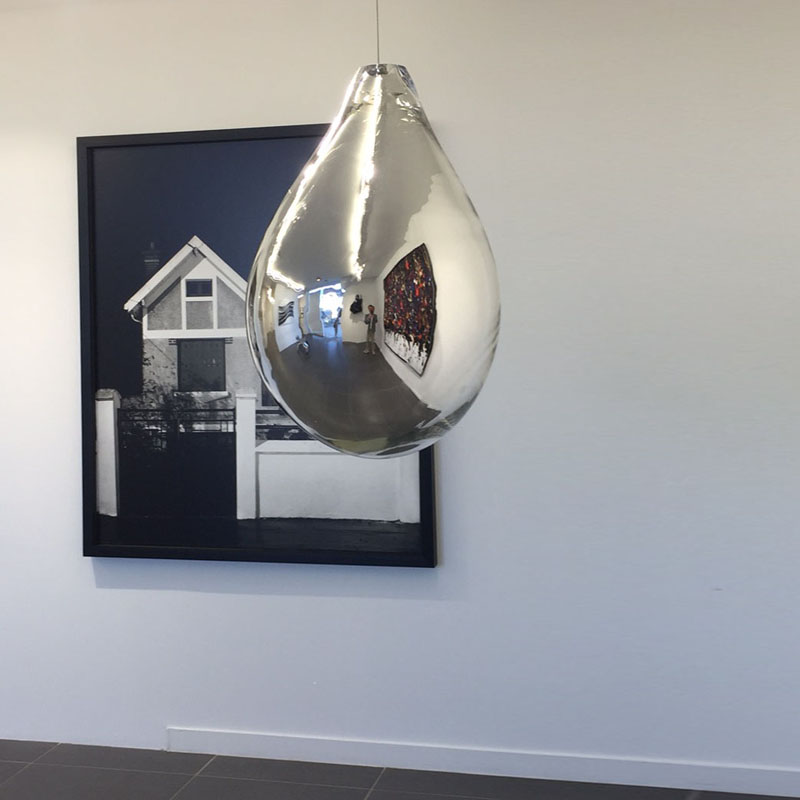 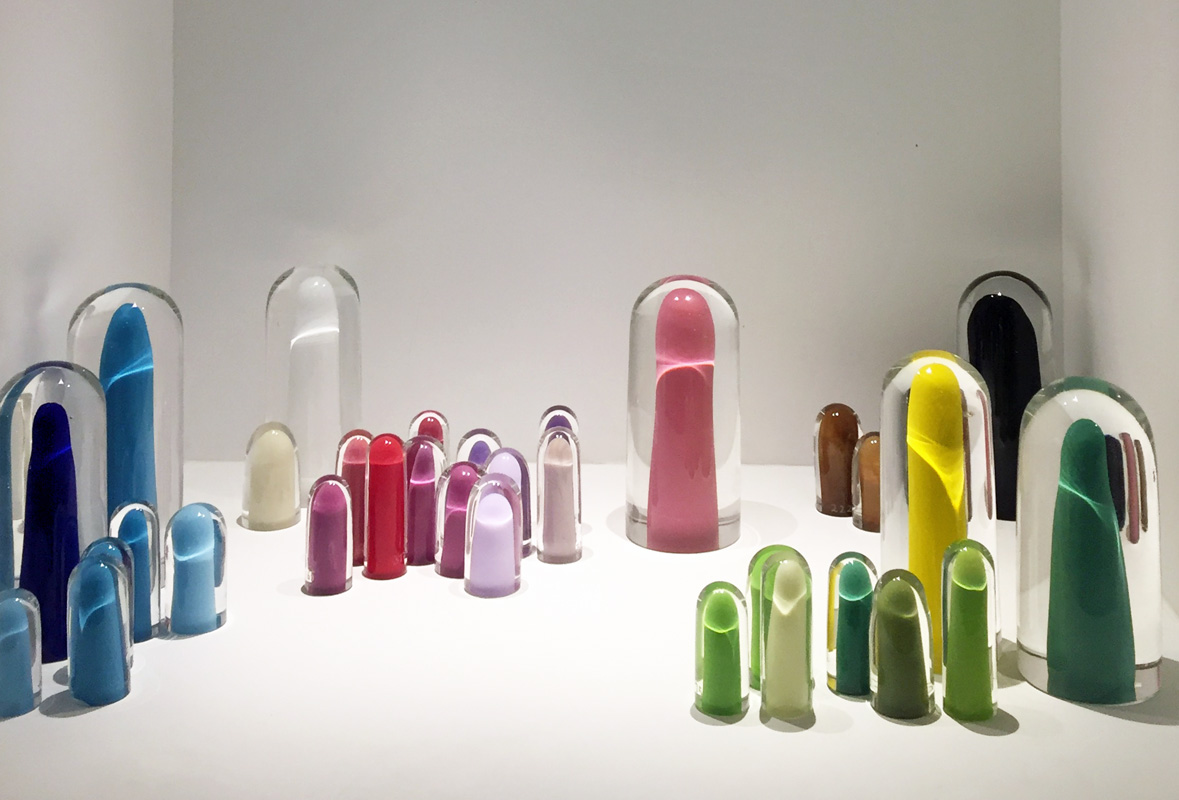 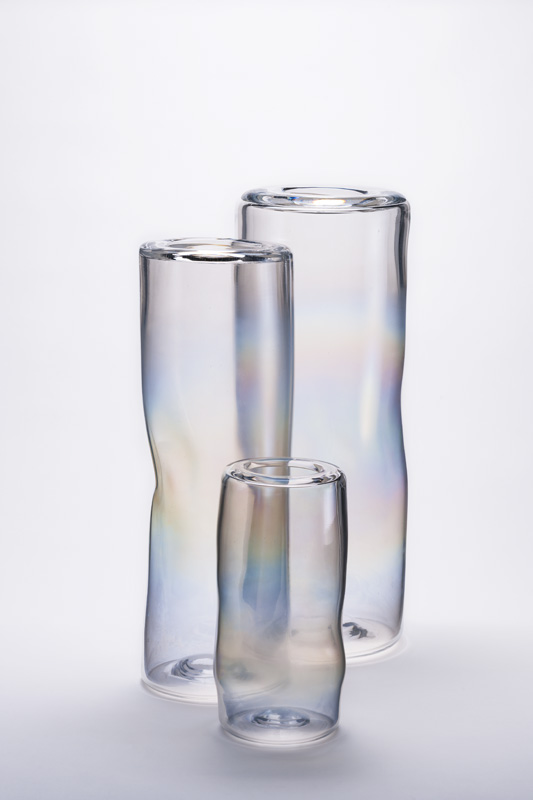 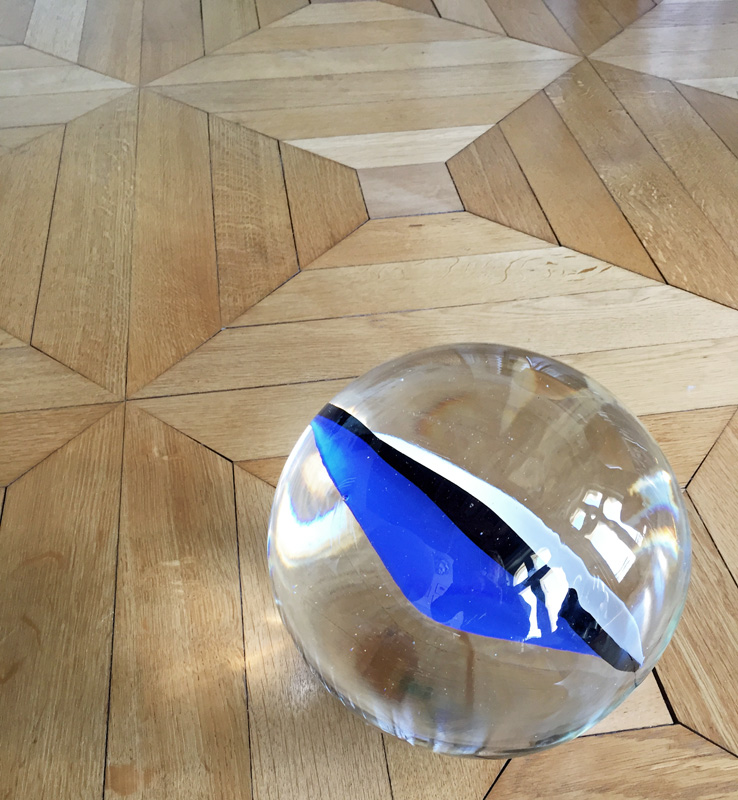