“In order to reach the invisible, you must work on the visible side of things”. This is Laurent Massaloux’s Discourse on the Method for his second solo exhibition, a challenge to our relationship to reality. The ordinary thus becomes matter for thought as much as matter for disruption. Massaloux is an ex-RADI Designers: never lose sight of this, because his objects are much more than mere objects. Much of his childhood was spent reading Tom Tit’s Science for Fun which made him a designer with a passion for experimenting with digital tools. Representing the “undrawable” but also “de-formatting” software are just a few of his idiosyncrasies. Here, he has explored the features of Cinema 4D – an animation application – to play with volumes and attempt to deceive our perceptions. The result verges on diplopia, a pathological condition of vision in which a single object appears double. Laurent Massaloux is inventing stop-motion design. He is giving shape to mutating, forming objects. “These are objects in a state of uncertainty”, he explains. Breaking away from strict functionalism to reveal the mysterious side of objects: such is his creed.
Time has worked on this exhibition: the project has evolved, the objects have pared down and reached a synthetic form. The details are not details, they constitute the object.

The Drone fireside seat is made of an aggregation of offset symmetric masses. Light shines off the crack in the glossy resin that covers this polystyrene slab. It’s almost a stealth object, an image of soft comfort. The Leaves lamps express the dynamics of objects taking shape before our eyes. Their folded aluminium leaves agglomerate into reflectors, one by one.
WhiteShadow are sycamore wall boxes haloed with fluorescent lacquer. They appear on the wall as masses in motion; one can perceive their luminous trace.
As is the case with the Doubble collection as a whole, the InsideOut and Wiper mirrors use a play of light to generate a form of abstraction that puts the magic back into our daily lives.
Laurence Salmon 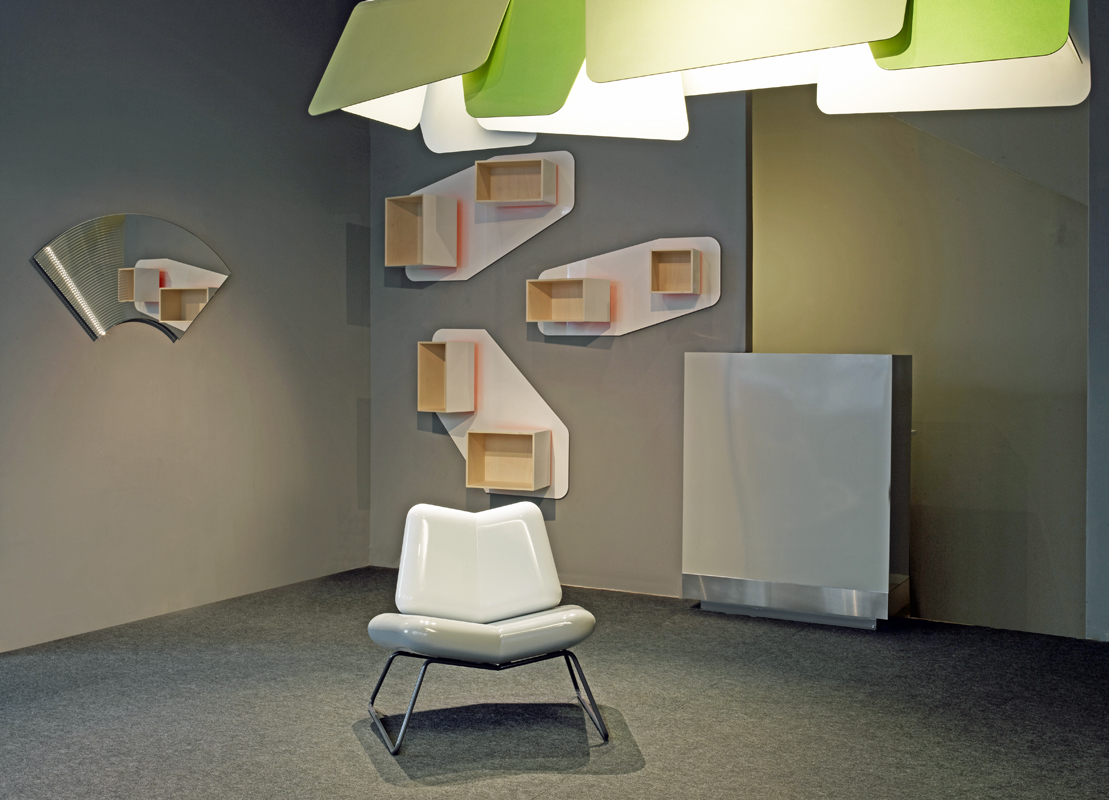