Sebastian Straasma poses with humour and offbeatness with his series of Dustcollectors an essential question for designers: the role of decor and function in the creative process. He starts from the observation that a certain number of objects, notably vases, which are archetypal by excellence, lose their initial function and become "unobtrusive objects".

It is true that many precious vases, both ancient and contemporary, are not actually used as such. They are symbols of the past used as decorations, and have become works of art in their own right, revealing an era, a collective memory, or are a medium used by artists. These non-objects are described by Sebastiaan as 'Dust collectors' or 'collects dust'.

If these objects lose their original Sebastiaan function, they find others and Sebastiaan proposes here a clear answer to the problem initially posed: "forget" the function of the vase and fully assume its new status to conceive them as a pure vector of artistic expression.
Sebastiaan Straatsma realizes that the true value of this project lies in the study of the limits of form and function.

Sebastiaan initially created pieces inspired by traditional vases, notably with Delphic or Japanese designs. Here, for the first time, he has freed himself from the constraints of these decors to have fun creating more personal designs.
For this series of uniques pieces he worked in collaboration and on an initiative of Toolsgalerie to tell stories of monsters, mangas, kaijus, galactic epics, partly realized in three dimensions.
All the pieces are unique, hand-made in coloured resin from existing moulds; drawings, characters and splashes are then glued together to form a structure with the piece.

Kaiju "strange beast" or "mysterious beast" is a Japanese term for strange creatures, especially giant monsters from Japanese movies called kaiju eiga.
The first kaiju were made in the 1950s, in the context of post-Hiroshima Japan. These early films often depicted the power of mass destruction represented by kaiju monsters destroying cities, and some such films are still made today.
The best known of these cinematic creatures is Godzilla. 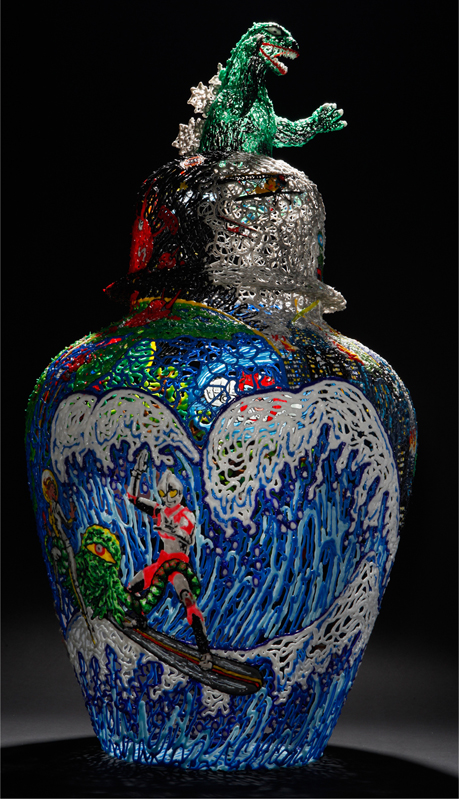 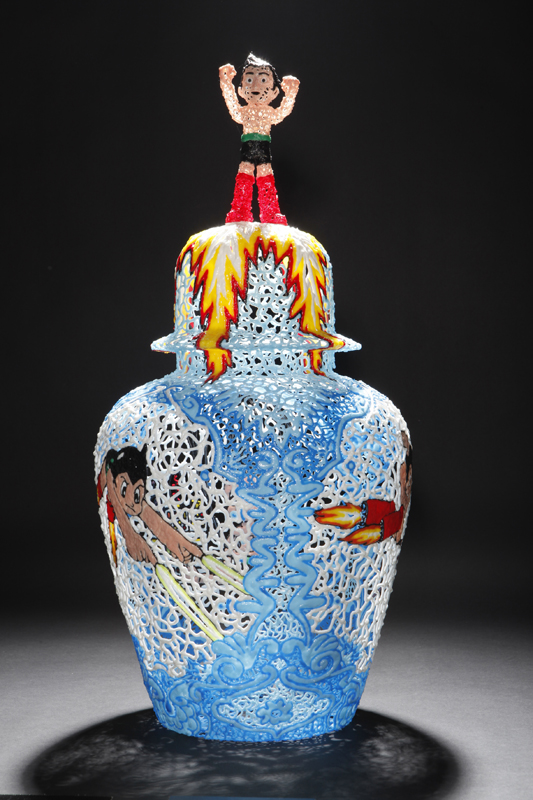